In which I wonder about Joseph, Sacrifice, and Love: Angels We Have Heard on High 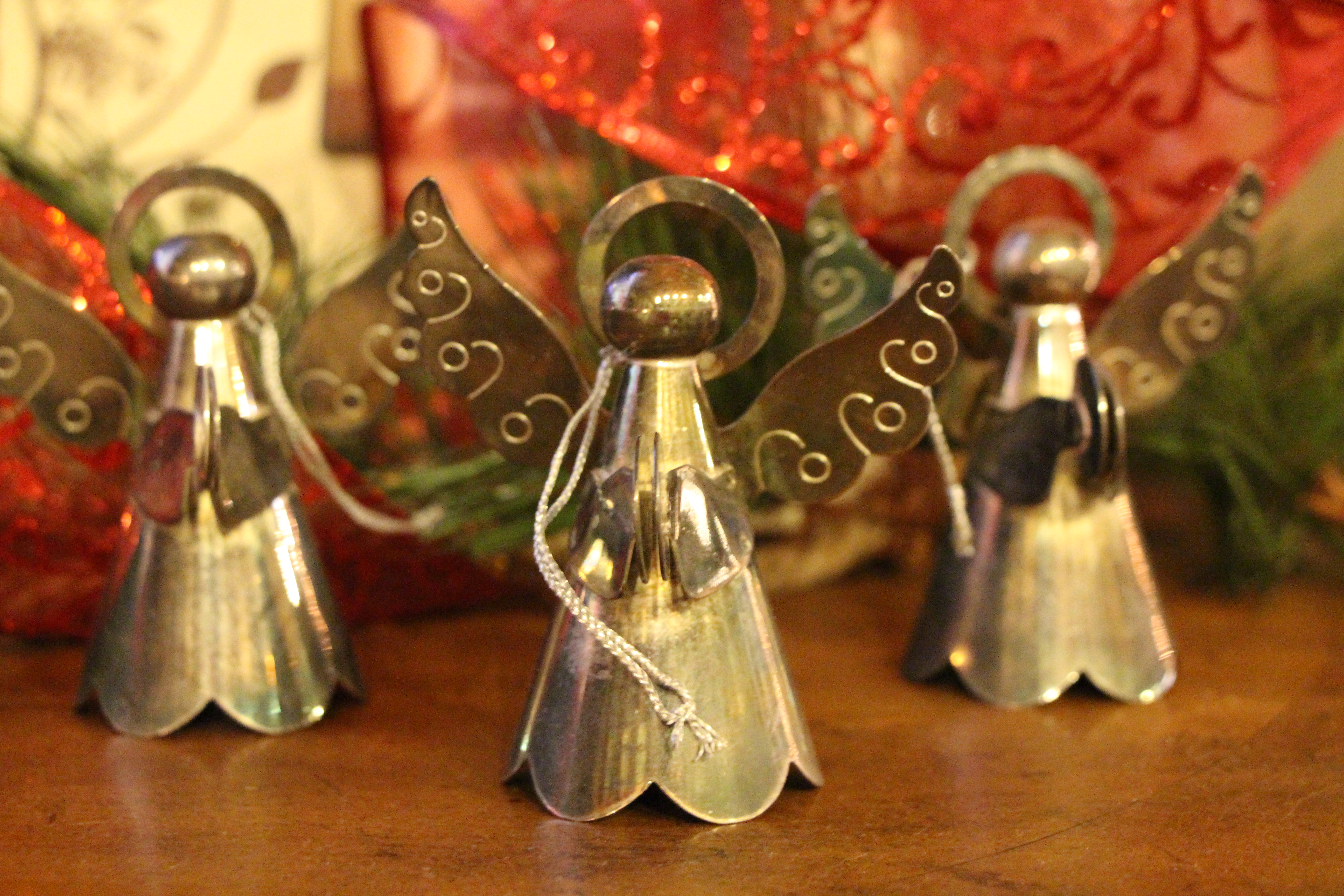 I wonder what sounds the shepherds heard as they stole upon the barn the night of Jesus’ birth? We sing phrases like joyous strain, sweetly singing, and cattle lowing, no crying he makes, (last two from Away in a Manger) and imagine this perfectly mixed cocktail of joyous exuberance and peace-filled tranquility.

I wonder if anyone saw or felt the sacrifice side of this whole thing?

Friday morning I had a rough start. Superman needed gifts wrapped for work, Dubs needed his lunch packed plus extra snacks for school parties, younger kids were vibrating with the prospects of Christmas vacation beginning…and it was only 7:00 in the morning.
I could feel my personal Grinch rising within, choking all the good-will and love toward my family, leaving my soul sprawled out and gasping for air on the kitchen floor. Then Superman opened our wine fridge and began fingering through our selection—most of which was newly purchased at last month’s Poplar Forest Wine Festival and being saved (or so I thought) for sharing with visiting family who would be coming over the holiday break.
“Which of these do you think they would like?” he asked me, speaking of his colleagues, completely ignorant of the fact that he was causing the already toxic anxiety within me to spike rapidly towards explosive proportions.
“What do you mean?” I knew what he meant, but I was hoping he didn’t mean to go all the way there.
“I mean of our Virginia wines. You know, the ones we bought at the festival.”
Just a little background: that wine was the first wine I ever bought at a wine festival (my first wine festival) where I spent a glorious day discovering the nuances of Virginia wines, and carefully selected wines to pair with meals I would be serving over the holiday season. The wine was not easily purchased—it took an entire process. It would not be replaced before Christmas.
My forehead lines began uncontrollably contracting.
“You want to give them our wine? Oh my gosh. You want me to give them my wine. Whatever. Fine. Just take it.”
Tears blurred my vision as I bullied around him to the wine case, pulled out my two favorite bottles and handed them over despite his protests and back-peddling, saying he could just go to the store or we could give them something I had on hand for everyday dinner consumption.
I scoffed, told him to stop talking, then walked quickly to my bedroom, tears rolling freely, shutting the door very firmly behind me.
I had been given an opportunity to sacrifice something of value to me and gift others in a spirit of true, Christ-like giving…and I failed.

I wonder if Joseph went through a process of sacrificing his expectations before he could give Mary the gift of his love and commitment to her? After all, there was a way these things were supposed to go—find a virgin from an upstanding family, settle down with her and start making descendants; sons of your own likeness…on your wedding night. Sure, Mary was still the first two. But their first-born son wasn’t exactly made in his own likeness, and he didn’t even get to “know” her until after Christ was born! The man took a pregnant virgin to be his wife. And their first months of “settling down” involved a long uncomfortable journey, a barn in which she would have to give birth, a feed trough for a bed, and his own two hands.
Of all the ways he “could have” had his married life begin, this was the way God chose for him.
I don’t know. Maybe it was so strange he just accepted it; rolled with the whole pregnant virgin wife, angel dreams, stable birth thing.
Or, maybe he, too, went through a process of sacrificing his expectations; dying to his own desires, so he could love the life God desired for him.
The final advent theme is Love. What was begun out of love, back in the beginning, now culminates in love—love come down to dwell among us. And while love is full of all the other things we’ve considered this advent season—hope, peace, joy—love is first and foremost, a sacrifice.
God, out of His abundant love for humanity, created, offered relationship, gave direction for righteous living and human prosperity. But out of the deep places of His love, He sacrificed…His son.
This is what true love does. It sacrifices.
And isn’t it amazing that in His moment of offering the world His perfect gift—given out of the deepest personal sacrifice one could never fathom giving—God offered it in a spirit of joy and gladness?

Angels we have heard on high,
Sweetly singing o’er the plains,
And the mountains, in reply,
Echoing their joyous strains.
Gloria in excelsis Deo,
Gloria! in excelsis Deo! 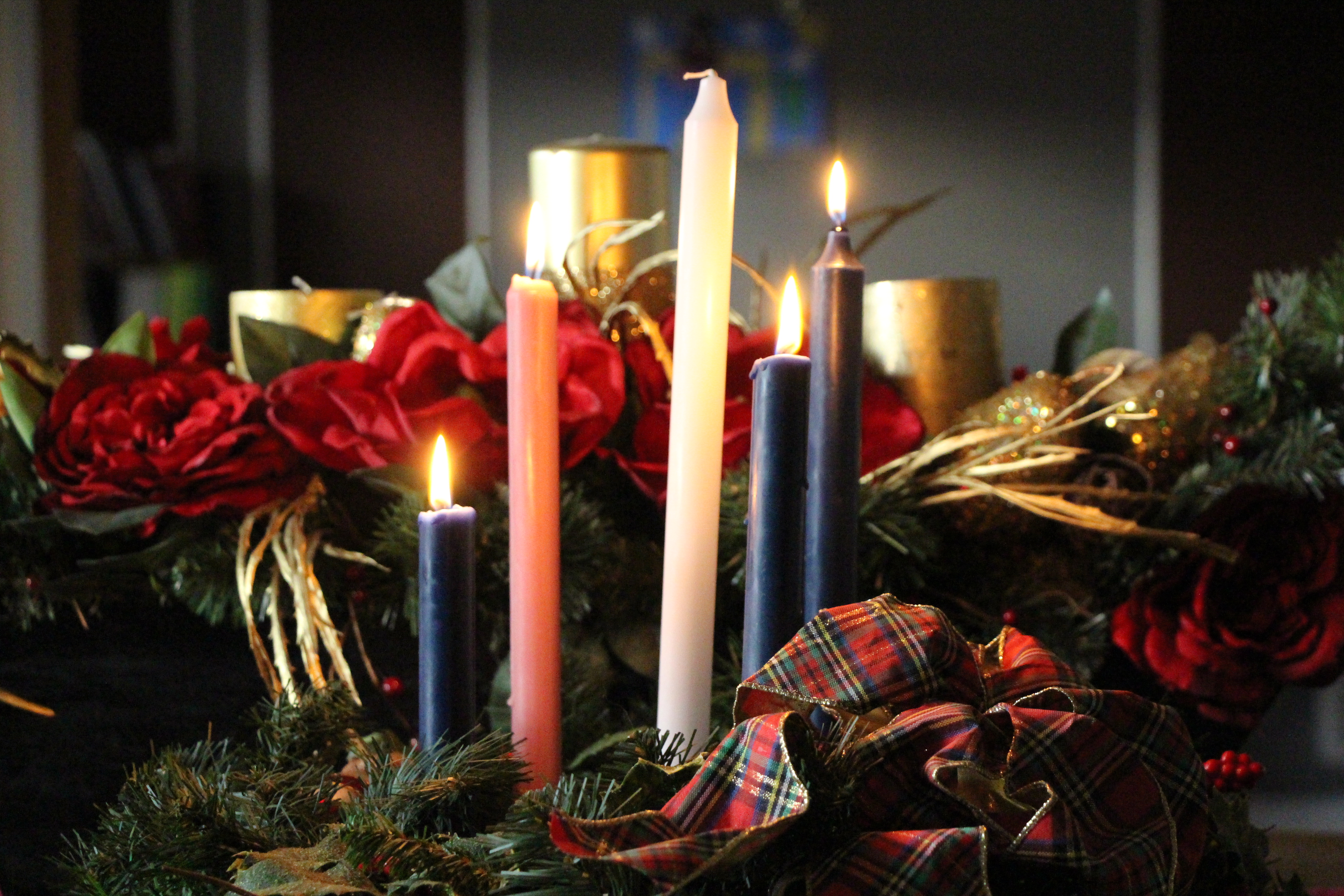 It didn’t take long for the Spirit to convict my Grinch-ish attitude and lead me to sending a repentant text to Superman, to which he replied in a most grace-filled way.
And then, as if on cue with the angels, I found myself rejoicing.
I wasn’t suddenly happy to have given my wine away—but the wine didn’t matter anymore. Living out His love mattered. Being the lighted candles on the wreath mattered. Living outside my emotions and within the eternal nature—no beginning, no end—of His Spirit mattered (something I’m still learning to do in other areas of life, by the way).
And in that moment, I knew Heaven had come to earth.