A Review: Henri Nouwen – The Return of the Prodigal Son, A Story of Homecoming 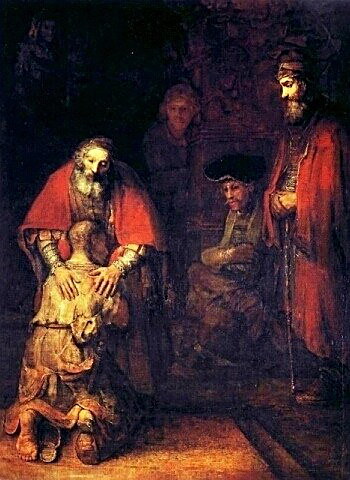 Rembrandt’s Return of the Prodigal Son

As promised, I am offering my first book review for 2014. To call it a “review” seems so formal and responsibility-laden. I prefer “wonderings” or “considerations”. Maybe someday I’ll reach the comfort and expertise level of “reviewer.” But for now…
The Return of the Prodigal Son was my first Nouwen read. It is a slim volume and since I didn’t know what to expect literarily (does his work read like a Lewis? Or a Foster? –both excellent writers, but requiring different concentration levels for digestion), I was thrilled to see I could introduce myself to his work in tidbit size rather than multi-volume load.
What I discovered was a man whose thoughtful prose had me sitting at my kitchen table in deep discussion with him, figuratively speaking, of course. Nouwen and I shared our pilgrim journeys in the early morning hours together with hot coffee in hand—mine with cream, his with a bit of sugar—sitting across from one another as dawn broke through my kitchen windows, but before any of the day’s commotion stirred.
The entire book spring boards from a seemingly random encounter Nouwen had with Rembrandt’s famous painting, Return of the Prodigal Son. The painting itself hangs in St. Petersburg, Russia at the Hermitage. This is not where he first saw it. His first encounter was with a poster, hanging on a colleague’s office wall. Instantly he was swept into the warmth and safety it portrayed; he says his “heart leapt” when he saw it, longing for the same sense of belonging—a place in which he, too, could come home.
That experience set in motion a sort of pilgrimage within Nouwen, in which he spent the next many years reading and researching all he could on Rembrandt’s life, the biblical story of the Prodigal Son, and then weaving these many threads together as he meditated and prayed, until he had created a story tapestry meant for his personal spiritual journey. His pilgrimage turned literal when he traveled to Russia and beheld the original—several days in a row for hours at a time. What resulted, is this short but saturated story filled with Nouwen’s personal reflections, meditations, and honest–often intimate–insights into his own spiritual transformation as he sought to understand Jesus’ most famous parable through the paintbrush strokes of a 17th century Dutch painter.
What makes The Return of the Prodigal Son so deep and good is Nouwen’s unhurried transparent observations as he relates to the younger son, older son, and finally—almost unwillinging—the father. His ability to dissect every stroke of the painting and story and pull out vision despite the sea of details, exposes his meditative spirit and spurs the reader into a meditative spirit him or herself. I found myself setting the book down every few pages, simply so I could ponder, slowing my mind to Nouwen’s prose, appreciating fully his many-layered ideas. Like tasting fine wine, The Return of the Prodigal Son must be read with slow deliciousness, never gulping or allowing the many nuances of his meditations to pass by unnoticed.
But not only this. That Nouwen was able to take a parable second (if you can even call it second) only to the story of The Good Samaritan and offer it in tandem with its power on others others throughout history—from monks, to scholars, to painters, to fellow pilgrims—is the genius of his writing. The The Return of the Prodigal Son is a story for the ages and the masses.
It is also a story for me.
This is the final, strongest thread, Nouwen weaves. The thread whose color represents you and me—every believer on spiritual pilgrimage towards the Father, thus toward spiritual fatherhood. Of course, we begin with the younger son—he is often the easiest to identify ourselves with: the rebel, the rogue, the one who wanted to sow his wild oats (and why shouldn’t he? is what today’s culture would say). His sin is lust, his road back is hard and slavish and he is fairly certain he will be harshly treated by the father. But instead he finds complete and total restoration, so that his question becomes, Can I accept it?

Then there is the elder son. The one full of duty, commitment…and seething with resentment. His bitterness has kept him from fully accepting the father’s love that has been for him all along. Nouwen asks, “Which is the more dangerous sin, lust or resentment?” Of course there is no easy answer to the question, but unlike the younger son who we see—both in painting and in print—be restored to his father’s household, the elder son stands stoically to one side as if trying to decide whether to cast off his heavy cloak of rejection and self-loathing (because—as Nouwen points out, these are always the unhappy companions of complaint and resentment) or remain comfortable in their false preservations.
Where the pilgrim’s journey ends is, of course, with the Father. But not as either of the sons. No, our vision, our commitment should be to becoming the father—and not just living comfortably within his loving embrace. It requires letting go of the lusts of the younger son and accepting the complete and total freedom that the Father longs to lavish upon us. It is stripping ourselves of the complaints, resentments and shrouds of self-preservation. But not through our own power. For just as the elder son is only illuminated as he steps into the light of the father’s love, so we are free of our “elder son complex” only as we allow the light of trust and gratitude to overcome our darkness. “Feelings” are not required here—only a commitment to trust the Father and continually thank Him, even when it hurts.
As the father, I must accept the calling to be “home”. No more chasing after missed childhood opportunities. I must become the “spiritually adult person”—trusting that real joy and fulfillment can only come from welcoming home those who have been hurt by life’s journey—loving them with no expectations in return. To give like this is a discipline. It does not come spontaneously. It is a practice of generosity and kindness—both words with Latin roots that are family connected. “Generosity,” says Nouwen, “creates the family it believes in.”
This life of generosity—the life of spiritual parenthood—is empty. It is where “dying to oneself” becomes more than a sentiment or sermon title on Sunday. But in the emptiness—in the death—there is freedom. Freedom to give without take, accept without judgment, offer without return. Nouwen calls it sacred emptiness, and every time we touch it, heaven and earth cry out with joy—the joy of the Father at his beloved sons and daughters returning home.
I am challenged to allow myself deepened by Nouwen’s reflections. I will never read the story of the Prodigal Son the same again—and I will never stop journeying towards spiritual parenthood, though it shall take me all of my days. So, on that note, I am symbolically passing my copy onto you. I hope you will read it and mark it well, as the Father opens your heart to His calling. And I hope to find you walking along the way as we make this pilgrim’s journey towards spiritual fatherhood—or motherhood—together.