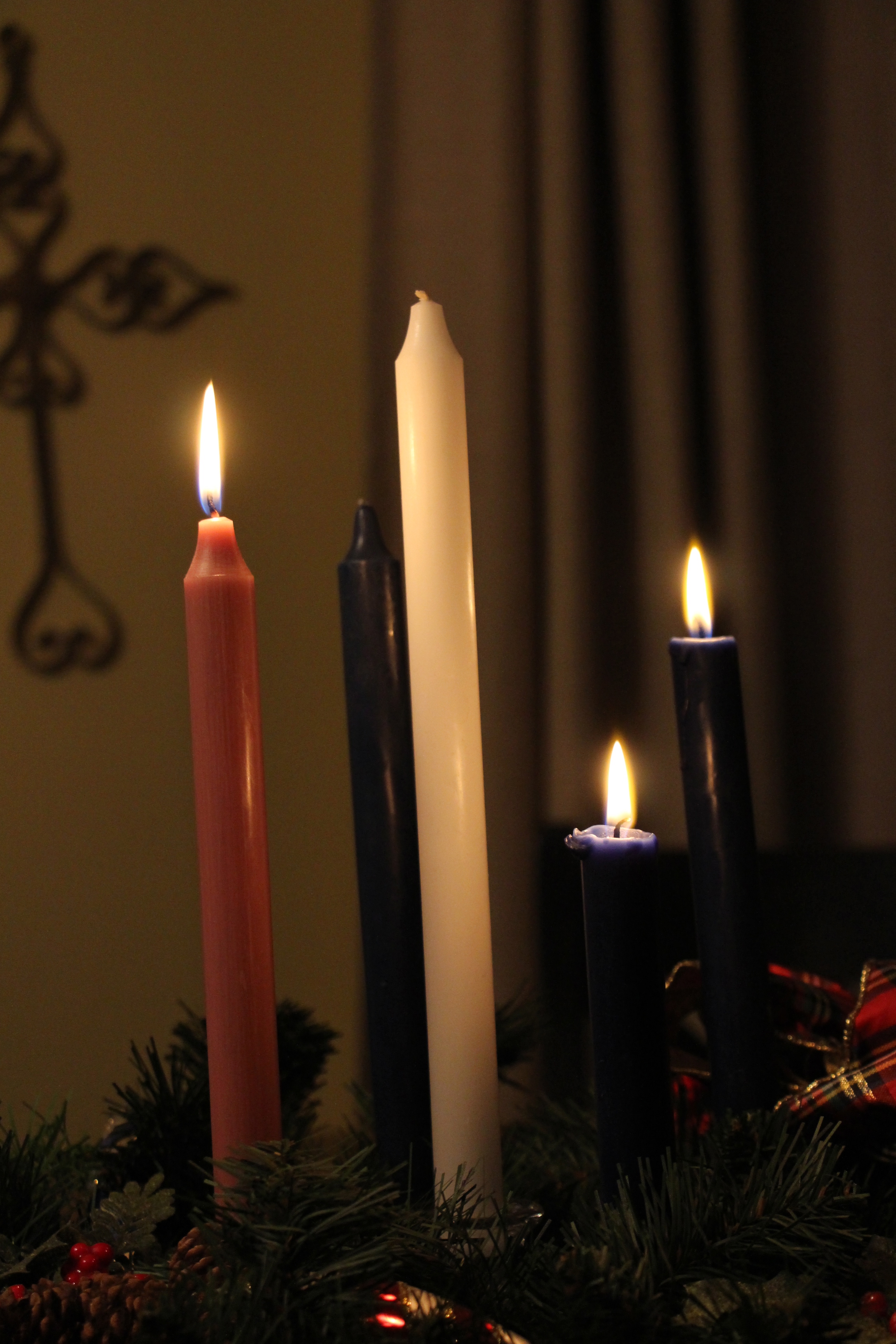 The pink candle was always my favorite. It also was most confusing to me. Pink for Shepherds? For Joy? Shouldn’t pink be for Angels and Love? Still I wonder about it.
But, maybe pink for Joy makes sense. With Joy comes light that shines out—just as the pink candle stands out from its three purple fellows (or deep blue, depending on your Advent wreath). And, isn’t it light that burst forth upon the shepherds that holy night?
Joy light.
Often, while my father read our advent devotions, my eyes would be watching the candles flame and drip wax. Sometimes, however, I would look out the dining room window at the outside places lit by our farm’s night light.
In the middle of our farm was (still is) a tall light. It looked like a street lamp—at least that’s how I remember it. It stretched out from atop a tall wooden pole that was also an electrical pole connecting our farm to the area’s grid system. It acted like a street lamp, too; coming alive at dusk and turning off as the sun stretched its early morning rays across the field and into our kitchen window.
I don’t remember often going out past dark, traipsing across the farm. When I did, it was to seek out my father; find out when he might be in for supper. This would involve a long walk from the house, through the yellow circle where the farm light cast its glow, and then into the dark before coming to whichever building I thought I would most likely find him—usually the shop or farrowing house.
What I remember about walking around the farm at night was the tremor inside me when I knew I was coming to the end of the light. From the house, the bulk of light was in front of me, but even the light from the house offered a comforting glow, much like a votive candle holder lit from its inside. It was when I neared the edge of the farm light that the darkness felt heavy and enveloping. But in order to reach my father, I had to step across the threshold of farm light and into the black of the night.

The other thing about walking around on the farm at night is the way sound magnifies. Even the sound of silence. Especially the sound of silence.
The country air is charged in silence in much the same way a flannel shirt comes out of the dryer in wintertime. When that silence is pierced through with a distant noise, it makes the dark’s cloak shift and grow even heavier. A car along the highway. A far away train blowing its whistle as it approaches every country road crossing. The occasional squeal of hogs trying to settle for the night. Each sound makes the silence louder and the darkness tighter.
Still, in my countryside darkness, I had light for at least part of my trekking around the farm. But the shepherds worked with only the moon and starlight as their light companions. Imagine, then, the terrifying brilliance of angels lighting the sky, piercing their senses, flooding their hillside with blinding white.
That’s not joyful. That’s terrifying!

Even when reading that most glorious scene of the angels visiting the shepherds, announcing Messiah’s birth and the whole company of heaven singing, “Gloria! Gloria!” my father maintained a steady, quiet tone. His zeal was expressed in measured pace. His fervor in his careful attendance to every word.

The angels came to the shepherds, overwhelming them with their sudden and terrifying glory light. But then, their words came through the charged and clamorous silence, as water over a rocky bottomed brook. Lilting and smooth. Reassuring in the knowing of their message.
Changing tremoring hearts to Joy.


(PS: Please excuse my mess as I transform my blog into an official website–always a messy and long-winded business.)
Copyright 2018 by Shari Dragovich