Degas, his nudes and the Kingdom of God

(Sadly, I’ve been working over this post for some time now. You can always tell when ball season hits our home. My already sporatic blogging hits a new level of unpredictability. There is so much more I’ve considered in writing this post – namely some of the ideas I’ve mentioned – barely beyond the surface – at the bottom. I truly would enjoy your comments and thoughts, disagreements, etc… wouldn’t it be fun to carry this discussion through a few more postings? We’ll see…)

During our week in Paris, we visited a lot of museums (Duh). And by some stroke of celestial luck (not really) every museum was hosting a special exhibit. And every special exhibit was like tripping over the corner of an ancient buried treasure while strolling along the beach at sunset. I acted with great (and amusing – to Superman) astonishment every time.
My favorite special exhibit was at the Orsay Museum – French art from the mid-1800’s to early 1900’s – just shy of modern art and overflowing in Impressionism. I’m mad over Impressionist art. I practically melted into Monet’s Water Lilies – but that was at the Orangerie Museum – another post, maybe.
At the Orsay (Paris’ old train station and primary setting for the book and movie, Hugo Caberet), a special exhibit exploring Degas and his work in nudes was on display (only in Paris would they think of studying the progression of an artist’s career through his drawings of nudes). Of course, this was easy to do with Degas; he drew and painted so many nudes! I didn’t count them, but it seemed like hundreds and hundreds and hundreds of nudes! Superman was over it right away. I admit feeling slightly uncomfortable being surrounded on all sides by drawings, pastels and oils of naked women; always a variation of the same pose – getting into her tub; or leaning over her tub, or drying herself after being in the tub…… and sometimes in some strange contortion verging on soft porn. 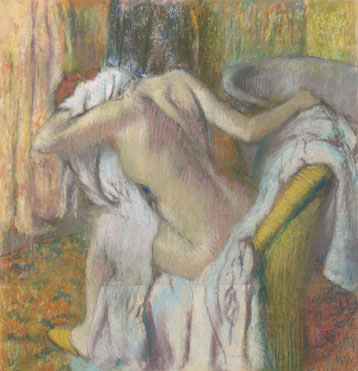 The exhibit followed a chronological order revealing faint changes in the artist’s style through the decades. His drawings of nudes were his practice chords,  hovering himself over paper, shaping each curve of line until his pencil seemed to glide through arcing movements on its own.
The most fascinating characteristic of Degas’ nudes is how subtly they change. Walking from room to room, canvas to canvas, it’s hard to note any visible difference from sketch to sketch. Half way through the exhibit, I began wondering what the fuss was all about – while simultanously considering maybe I simply wasn’t enlightened enough to appreciate Degas’ hundreds of naked women drawings.
But then in the last room, while studying his late-in-life nudes, turning from one wall to the next; my eyes caught on some of his early work – through a portal of spaces I’d already visited.
Ah-ha. I caught the change. What was imperceptible while moving through decades, became pronounced and sharply contrasted when time warped. While his early work held to its curves rigidly and with photographic semblance, his later nudes flowed curvy, full-bodied, almost distorted but somehow more real. By simply repeating and practicing curve after curve, sketch after sketch, Degas drew, painted and sculpted his way into his most authentic self.
Malcolm Gladwell, in his book Outliers, talks about the rule of 10,000 hours. Any person regarded as “expert” in his or her field, has inevitably put in 10,000 hours of practice time. The pianist plays 10,000 hours worth of notes. The runner logs 10,000 hours of miles. The artist draws 10,000 hours worth of nudes.
There is much I begin mulling over as I consider Degas, his 10,000 hours of drawings and my own passions put into practice. On what am I focued? Where do I begin? If drawing nudes is foundational to the artist, then what is foundational to the writer? And – maybe even more haunting a question – what must I sacrifice and do I have it in me to let go?
As Superman noted, 10,000 hours belongs to the few and far-between individuals who actually become “experts”; set apart in their fields. The vast majority of our population is destined to “average”. Hmmm… what a sad consideration. However, statistically, isn’t he right? And, I wonder, in this product driven era of instant everything, virtual realities and computerized help for every skill (“why learn to parallel park?” my son says, “your car will do that for you!”), intensified by a postmodern worldview increasingly emerged in the chaotic, meaningless and inability to distinguish “good” from “evil”; are we slowly “evolving” out of our capacity for the efforts of 10,000 hours?
As Paul so emphatically says to the Romans, “May it never be!”
As uniquely created individuals created in the image of God, don’t we all have the capacity and calling of 10,000 hours? And when we begin putting our 10,000 hours into practice with authenticity and purity of soul, doesn’t that bring glory to the Creator and – dare I say – bring God’s Kingdom closer to earth?
I wish every person with passion burning in their souls could walk through that Degas display. His work is among the most famous of his time – yet he was focused on the process, not the product.  How many more “experts” would their be among us if we could only do the same?