In which I take up coloring the Word: What Child is This?

1. What Child is this who, laid to rest
On Mary’s lap is sleeping?
Whom Angels greet with anthems sweet,
While shepherds watch are keeping?

This, this is Christ the King,
Whom shepherds guard and Angels sing;
Haste, haste, to bring Him laud,
The Babe, the Son of Mary.
2. Why lies He in such mean estate,
Where ox and ass are feeding?
Good Christians, fear, for sinners here
The silent Word is pleading.
Nails, spear shall pierce Him through,
The cross be borne for me, for you.
Hail, hail the Word made flesh,
The Babe, the Son of Mary.
3. So bring Him incense, gold and myrrh,
Come peasant, king to own Him;
The King of kings salvation brings,
Let loving hearts enthrone Him.
Raise, raise a song on high,
The virgin sings her lullaby.
Joy, joy for Christ is born,
The Babe, the Son of Mary.
What child is this? The song begins. I wonder if that is what the shepherds thought.
I wonder if the shepherds knew they were gazing into the eyes of the Word when they came to a Bethlehem stable that night. I wonder if they knew the words—the logos—of God. Did they know the Law, the Prophets, and the Wisdom writings? Surely they knew the stories of old, at least the big ones. Surely they knew the story, In the Beginning…
In the beginning God created…In the beginning was the Word…
Before there were words to be written, words to be communicated, there was the Word, and the Word was with God and the Word was God. He was in the beginning with God. Together they created the heavens and the earth. Together they breathed life into man; took a rib from that man and formed Eve. Together they met with Abraham in his tent, told him his old wife Sarah would have a son. Together they provided a ram, so that later, Abraham would not have to sacrifice that same son.
I wonder if the Word thought of his own sacrifice, every time his people spilled lambs’ blood. By the time the angels sang and the shepherds witnessed His entrance into the world, how many millions of sacrifices had been made in accordance to the Law?
And yet, the law could not be fulfilled by words and animal sacrifices alone.
The Word must be made flesh and dwell among us.
Word, in the Greek, is logos. It means: word, spoken or written, often with a focus on the content of communication. “The Word” is a title of Christ emphasizing his own deity and communication of who God is and what he is like.  (Strongest Exhaustive Concordance–NIV, Greek to English, 3364)
What child is this? 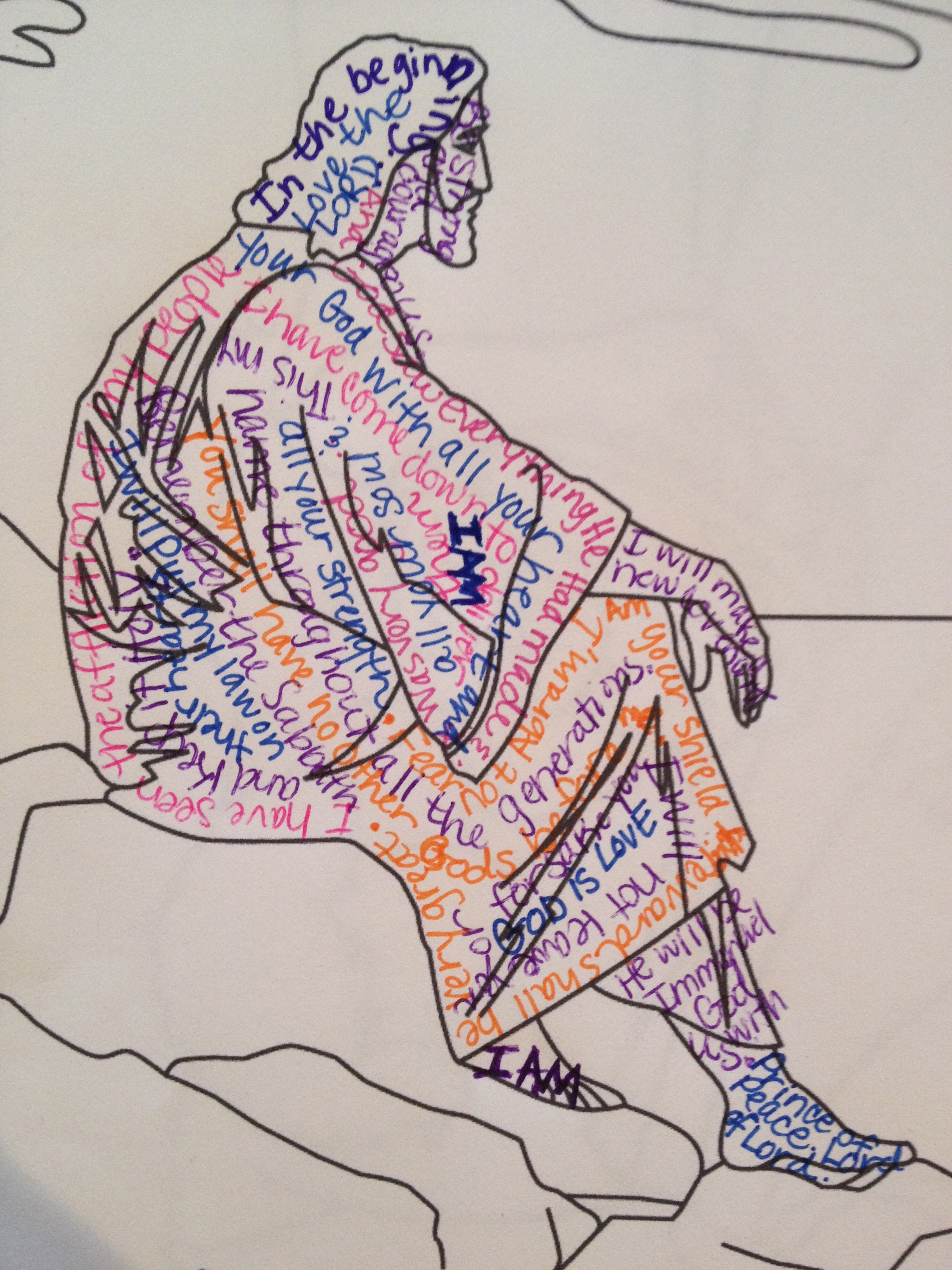 My own version of the Word

I wonder, as I take a coloring page of Jesus and begin writing who He is and what He is like in small colored pen, all over His body.
He is the Logos. The One who created the very place—the Bethlehem—of his birth.
This, this is Christ the King,
Whom shepherds guard and Angels sing;
Haste, haste, to bring Him laud,
The Babe, the Son of Mary.
Christ the King—Word made flesh—comes as an infant to live fully among us; the living embodiment of God’s Word.
Why lies He in such mean estate,
Where ox and ass are feeding?
Good Christians, fear, for sinners here
The silent Word is pleading.
Not only does He come and dwell among us, He comes in “mean estate.” He comes to the town of nowhere. He is born in a place with nothing—nothing for humans, that is. Just a place for the animals.
But to those with their noses stuck in Scripture, those studying the heart of its meaning—its intent and not only its sayings—the One lying in mean estate was truly God’s Word—the beginning, the middle and the end—the words of a love story written from the tips of his baby toes, past his baby belly, across his baby chest to the crown of his baby head.
And how exactly did Jesus show “who God is and what He is like” during His time on earth?
Say Ann Spangler and Lois Tverberg in their book, Sitting at the Feet of Rabbi Jesus:
Unlike other rabbis, [Jesus] spoke with great authority, as though he knew the mind of God—and this was the essential difference. Many of the other rabbis tended to focus on defining the minimum requirements of the law…This approach makes sense, since by nature, laws are limited to defining the least good thing you can do and still stay within the boundaries….. Jesus took the opposite approach. Instead of focusing on minimums, he focused on maximums, speaking about the ultimate aims of the law.”   (Spangler & Tverberg, p. 171, bold type mine)
Nails, spear shall pierce Him through,
The cross be borne for me, for you.
Hail, hail the Word made flesh,
The Babe, the Son of Mary.
In His final act as the Word on earth—revealing the maximum aims of the law—the babe grows up and sacrifices Himself, so that all men—not just the righteous rule followers—can see and live in the Word for all eternity.
We are no different than those waiting so long ago. Again, we wait for Christ to come. Maybe we should consider what our preparations look like—maybe I need to consider…
Is my nose stuck in His Word, searching the Scriptures? Has it been a lamp unto my feet and a light unto my path? Have I delighted in Him? Have I been especially still in this Advent season? Is He the living, walking Logos of my life?

If I were a shepherd, would I be able to answer…
What child is this?
(Just for fun, visit Best Coloring Pages for Kids on the web and download your own picture of Jesus. Fill it with the Word–those Scriptures that speak deepest to you–Keep it by your Bible and add to it over time–go ahead, feel like a child again!)