On Monarch Migration & the Butterfly Effect 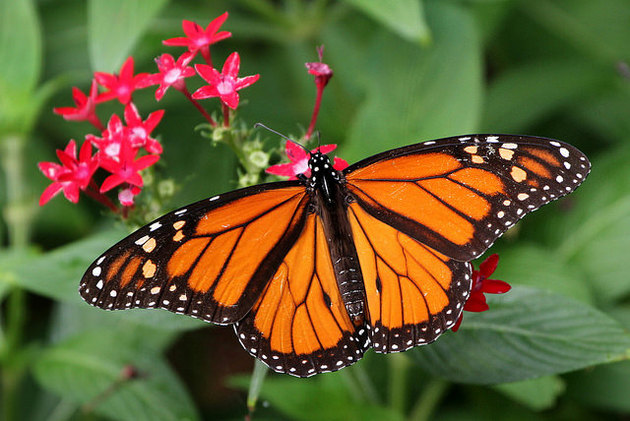 They are gone now. It has turned cold and I imagine they need warmer air for their transcontinental travels. But while they were here, they were glorious. Flutterings of burnt orange flame topsy-turvy on wind currents; whispering between invisible particles of air that fill the space between earth and sky.
I started noticing the monarchs—one here, a couple there—in late September. They’d dance past me as I was getting in my suburban to go…again. For so popular a butterfly species, it seems to me monarchs are hard to come by.
As a child I noticed monarch butterflies as a delight, not an anomaly. I remember growing up with monarchs floating around my family’s farm. They were one of my favorite distractions (when being distracted was right and not a luxury) and one of the few insects I’d purposefully work at touching.
But my noticing of the monarchs this time was different. This was the kind of noticing that felt like waking up after a long colorless sleep. The kind of remembering that happens when I revisit a cherished childhood story and reacquaint myself with characters still alive, and more vibrant than ever.
I hate to admit this, but there was also skepticism in my noticing. I knew there is another species that looks similar to the monarch: the viceroy butterfly. Its wingspan is smaller by over an inch (3 3/8 for the viceroy at its largest; 4 7/8 for the monarch). Its color is muted rust compared to the fiery orange of the monarch. The viceroy’s hindwing is black-veined in a slightly different pattern. Its flight is more erratic and less elegant than the monarch’s.
But, I didn’t know to look for these particular differences while I was noticing the butterflies’ presence in our small mountain city. The only thing I knew was monarchs migrate. Maybe this is what I’m witnessing, I’d wonder as I made my own kind of flight patterns from errand to work interview to kid event; continuous oblong and twisting circles across Southwest Virginia.
And that’s all the space I allowed these dancing flamed visitors to occupy in my mind.
Until one afternoon when they—with all manner of grace and decency—demanded my complete and undivided attention.
I was sitting on my back porch working on a homework assignment for a class I’m taking online. It was one of those warm October afternoons; the kind that feels more like late summer rather than a month into fall. The sun was casting long shadows causing my backyard view to present as either muted hue or a Midas-golden glow. I could hear the breeze catching and unsettling the worn-green leaves on the trees around me but I couldn’t feel it, as my back porch is fairly protected from mountain winds. Every so often I caught wafting smells of the neighbor’s fresh mowed grass, or my tired perennials and the potting soil still moist from our most recent rains. Certainly, it was a nice afternoon for doing homework outside.
I was mulling over how what to write about that week’s readings and staring out at this scene—shadows and goldenness, like Monet’s sunset haystacks—with no particular conviction, no deep and singular admiration for what I was viewing. Instead, my mind was filled with my own words and thoughts and personal smartness.
Then a monarch came flitting up over the crest of hill that makes up the edge of my backyard. I watched it dance and glide along like a tiny marionette on an invisible string. It slowly made its way across my yard to the porch, did a few drunken laps around my potted flowers, then proceeded on along the side of the house until it disappeared to the other side.
Wasn’t that fun, I thought, and then inhaled deeply as if to hold the moment in lasting memory.

“The butterfly counts not months but moments, and has time enough,”

Maybe this is what I was trying to inhale—living in peace with the moments and time enough. Far away from the constant pressure of my months.
But, of course the moment ended. I straightened myself to face my work.
But then another butterfly popped up over the edge of the hill—from nearly the exact same spot.
Then another.
And another.
For the next half hour (at least) monarch butterflies—sometimes in the singles, sometimes in twos or threes—came floating up over my ridge and across my yard. They mostly came from the same place, but occasionally my eye would catch a dance of orange from the other side where our cleared grassy slope meets a small forest of trees. No matter which side they tracked from, they all made their way to some patch of final blooming flowers. They’d hover over the flowers as though connecting with a necessary touchstone in their journey. Then they’d meander their way around my home—either over the top (no small climb) or around the side–continuing on their way toward the mountains to my south. 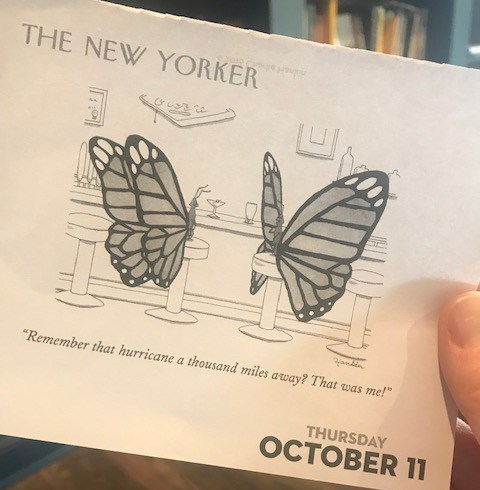 There is a saying about butterflies that goes something like: The flap of a butterfly’s wing in Brazil can set off a tornado in Texas. (credited to Edward Lorenz in 1979, and then James Gleick in 1988)It’s called the Butterfly Effect, and it’s related to Chaos Theory. It’s the “science of surprises”; that is, the study of the unpredictable, the nonlinear, the cause and effect of those minute chain reactions and relationships that can’t be measured, but exist all the same. It’s understanding that our world’s systems (natural, economic, social) are full of unpredictable, chaotic dynamics that all effect one another in ways not easily measured with neat and tidy mathematical equations. Mostly, it’s the study of the interconnectedness of all these systems with the hope we will make better decisions—individually and collectively—for or future well-being.
It’s like the old Christmas classic, It’s a Wonderful Life, where we see the sheer magnitude of one man’s life—not a powerful man, not a famous man. Just a man.
Or the Garden story in Genesis, where we read of a place and people so interconnected that to make one particular choice is to alter the entire trajectory of all creation. And alter it in such a particular way that now things like truth and mercy and goodness and grace and beauty and forgiveness all exist. Not only exist, but they abound.
At least, this is how I understand The Butterfly Effect. 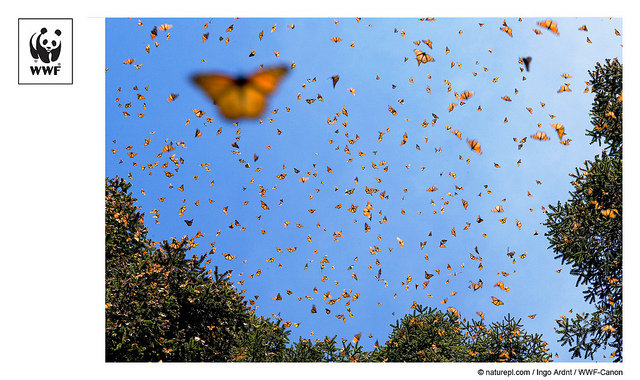 And what about those dozens of monarch butterflies I witnessed that October afternoon; choosing my particular hill as part of their migratory pattern? What kind of Butterfly Effect—if any–have those butterflies had?
I have no idea. Who can measure such things?
All I know is I’ve spent several blessed weeks researching and reading about monarch butterflies. I’ve put duct tape on that noisy inner critic guilting me over wasted time and “childish” ways.
Instead, I’ve allowed myself to indulge in the purity of “childlike” distraction. I’ve pulled out my old nature study guides and let them live scattered and open on my desk. I’ve spent several afternoons googling monarch butterflies and then filling journal pages with notes and wonderings. I shared my monarch migration experience with my classmates online that very afternoon.
And what if, after reading my meanderings on monarch butterflies, you allow yourself to be distracted in a childlike way? Notice something new (or old) and follow it for a while? You know, instead of scrolling through social media for the umpteenth time that day. Or clicking your way into yet another ranting political opinion piece. Or worrying about Election Day results that will happen tomorrow.
Maybe, just maybe, we could create our own Butterfly Effect.