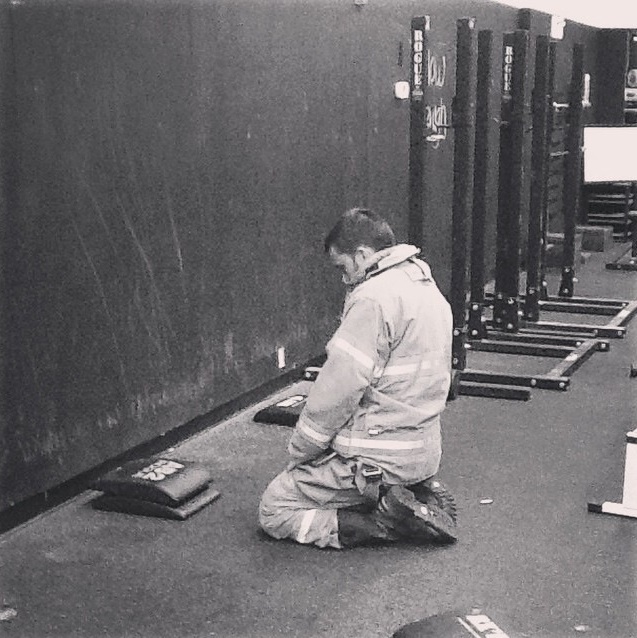 One of my firefighter coaches

Of course we were going to do a Memorial WOD today. On the thirteenth anniversary of 9/11, what else would a good crossfit box do?
I knew the structure of the workout before I walked into class this morning: there was a 2001 meter run (or row) at the beginning of the workout, nine exercises done eleven times each in the middle, and then another 2001 meter run (or row—the opposite of what you did in the beginning) at the end. Everything about the workout was significant. Even the prescribed weight for the movements represented aspects of that day (*I have posted the wod and each part’s representation at the bottom of this post).
What I wasn’t so sure about, were some of the prescribed weights for women. A 120 lb. power clean? I was just getting used to 95 lbs. And an 85 lb. thruster…whoa. That is a lot of weight to press from a full squat to overhead. I have never done either movement at that weight before.
But then again, which would I rather: to be scratching my head over doing a 120 lb. power clean? Or spending this morning, instead, at a memorial service at the Pentagon or in NYC, remembering once again that day thirteen years ago when I kissed my loved one and told him—with no real conviction—to have a good day. That day when he was alive…and then he wasn’t.
While warming up, we remembered to one another where we were that morning. Kathleen was on the phone with her sister (I think that’s what she said) with the news on, saw a plane hit the World Trade Center and said, “Some asshole just ran into the Twin Towers. Can you believe that?” (this, among many reasons, is why I love Kathleen so much). Stacey was going about her day and had no idea what was happening until much later, despite several family members trying to get ahold of her. I was getting ready for my Tuesday morning women’s bible study on post—Ft. Hood, TX. I had the Today show on our old hand-me-down console television and Wyatt (who was two) was sitting on the floor in front of it, playing with some of his trucks while four-month-old Isaac was in his bouncy seat slobbering all over some toy in his mouth.
Just like all our grandparents can remember exactly where they were upon hearing of the attack on Pearl Harbor. And our parents remember every detail of the day President Kennedy was shot. As if it’s some sort of requirement for every generation—to have a horrific tragedy that brands itself so deeply into the tissue of our memories, we die with the feeling that it happened only yesterday.
After the wod, I was sitting on a box, elbows on knees, head in hands, sweat dripping on the floor in front of me, and trying to get my breathing under control. Despite all this, I was thinking how happy I was with myself for Rx’ing the wod and finishing strong, when one of our coaches—who happens to be a Roanoke Firefighter—came up to me and offered me a fist pump.
“I saw you never quit working. Thank you, we appreciate that.” 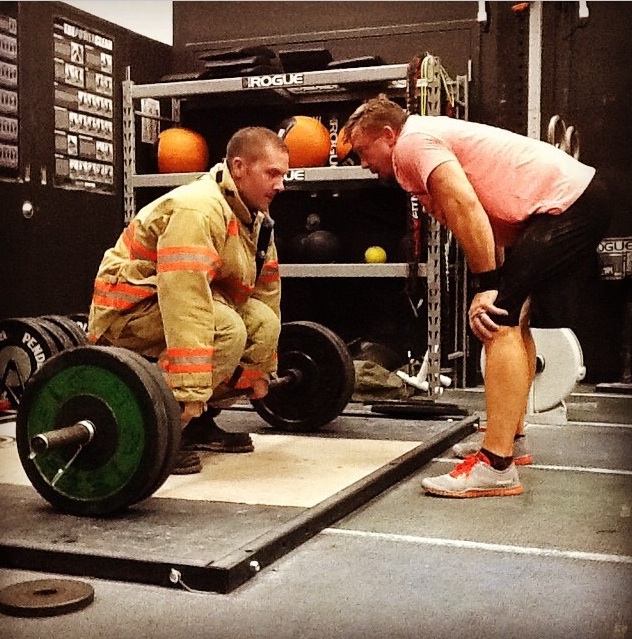 My other firefighter coach

All my private backslapping welled up in my throat until I about choked on it.
But that wasn’t the half of it. Five minutes later, as I was gathering my things, I turned and saw him—my coach who is a firefighter—in line with the next class, hand on his heart saying the pledge of allegiance. In his full firefighting gear. All of it. Down to the rubber boots.
Something happened at that moment. Looking at him, I didn’t see my coach at crossfit who I know is a firefighter. I saw the Firefighter, himself. And then I saw every firefighter he represented. Especially the ones from thirteen years ago, today. Standing full and complete in their convictions to serve and protect…me.
He didn’t have to do that.
But, he did. They did.