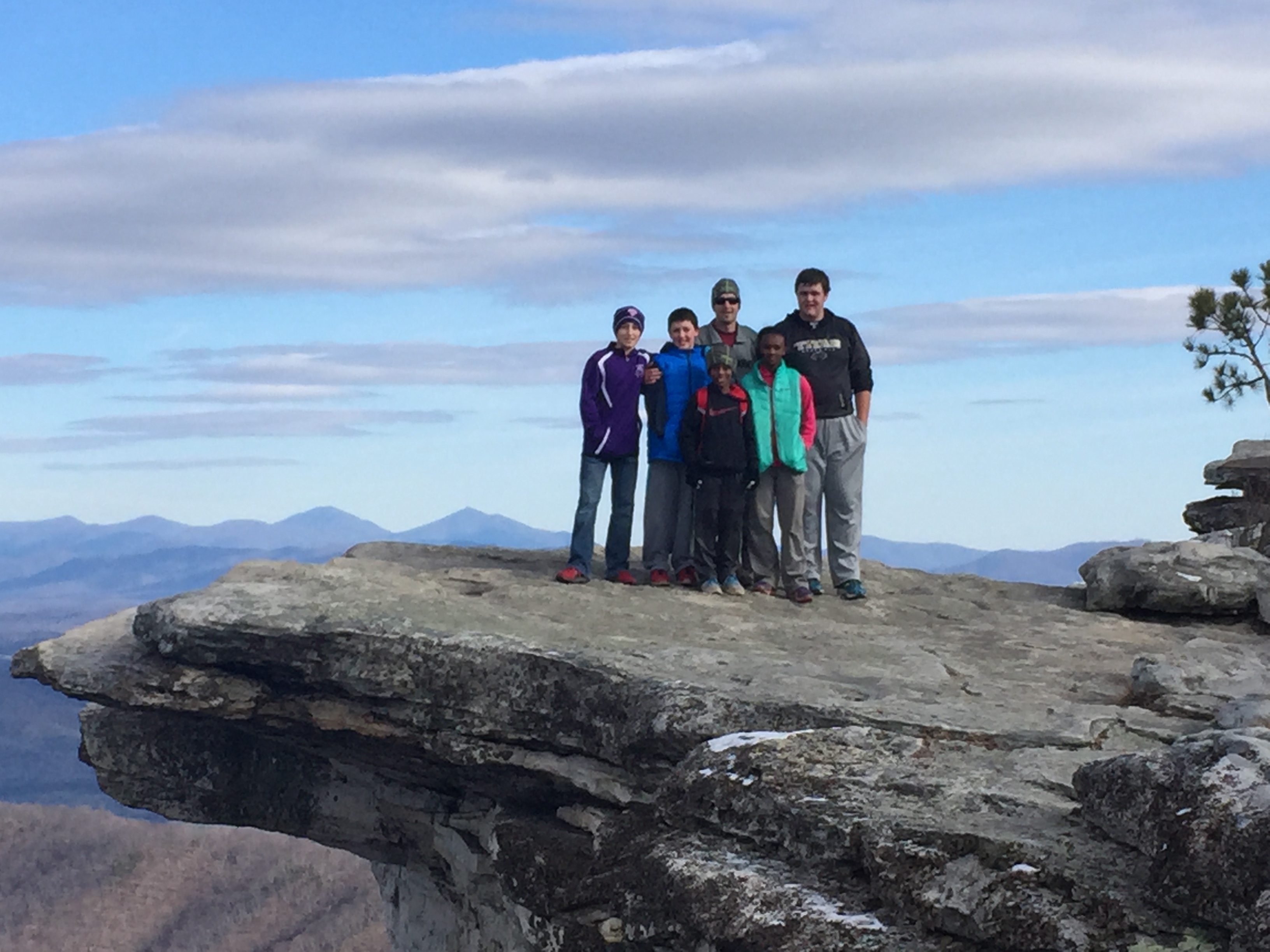 I am reading Leo Tolstoy’s epic, Anna Karenina. Even if you’ve never read the story, I’m sure you’ve heard its opening line:

All happy families are alike; each unhappy family is unhappy in its own way.

Far be it from me to disagree with Mr. Tolstoy, but this line has always puzzled me. I can understand the second part, just not the first.
Especially when I consider our family.
On New Year’s Day, Superman had it in mind to kick off 2015 with a family hike. We have lived in this most beautiful part of the country for a year and a half now and have not yet taken full advantage of the outdoor wonders around us—especially as a unit.
So, despite the initial bellyaching (though minor) and grumpy looks (not full grouch, however) we packed, prepared, then loaded in the suburban for an 8-mile hike (4 in, 4 out) to one of the Appalachian Trail’s most photographed sites: McAfee Knob.
There is nothing exceptionally difficult about this hike along the AT. The path is wide and the ascent to the top is fairly gradual—just long. The last mile or so is steeper and more narrow, marked by more boulders, roots, and sections of climbing (not on all-fours, mind you). It is a long hike, to be sure, but certainly not overly strenuous—unless you do it Team Dragovich style.
I wanted to hike on New Year’s Day to be outside, begin this year in open space surrounded by God’s wonder He gifts me with every day, but I’m too busy to notice. I didn’t care that it is the dead of winter, that I would be looking at shades of brown instead of green, or that it was a chilly 40 degrees, rather than a balmy 80. In fact, I looked forward to it—no leaves give better views. Cooler temperatures offer less overheating.
Boy, did I miscalculate.
We got on the trail and immediately my five children hustle ahead of Superman and me. This was fine, great even, until they were out of view. I had flashbacks of hiking with my parents as a child; my brother and I were always rushing ahead then coming back to check in with them, like a German Shepherd running back and forth keeping tabs on all its people (I know, I have one). I always imagined we were so much faster because my parents were—well—old and not so athletic.
Ehem…
Anyway, there they were, rushing ahead, then trailing back, which I determined was fine. Especially since one of them–Bammer–decided to hang with me so we could go into noticing the nature around us together. We had a grand time; pointing out deep red branches spiking up among the brown, stopping at overlooks to name mountain peaks off in the horizon, noticing the patterns of pastures and fields in the valley below.
But darned-it if two of my children—the two who have the most oily-water relationship—didn’t keep rushing along the trail at a pace I became increasingly uncomfortable with. I yelled at them to slow down. They did…for a moment. I yelled at them to slow again. They did…again.
Then, they didn’t.
I knew what was happening. It had turned into a contest. The need to show one another up overtook all their sensibilities—even that of obeying my ever-shrinking commands. With that, all my hopes for a pleasant day of hiking and noticing dissolved into just another day of trudging through. I hiked along with the other kids, but my mind was stuck on the two and all their issues—real and perceived. I kept speeding up without meaning to, until I was in a full-blown sweat underneath my layers. My anxiety seeped onto the others so that soon there was no more noticing from any body. Our only focus was catching up with the two rascals.
When we finally reached the summit, I was fairly drenched in my sweat and fully bitter in my attitude. Then the wind and colder temperatures (a good 10-15 degrees difference from the base) shot straight through me.
It was awful.
But there, safe and sound, were oldest and youngest sons—not super happy, but not angry at one another either. Everyone was cold and tired and a little terrified to be up so high and so near a treacherous misstep. Once we could make ourselves look out, the views were breathtaking, indeed. We found the most sheltered spot we could, huddled near a wind-stubbed tree, and ate our lunch. We were all sweaty and cold—except for Superman, who repeatedly mentioned (even on the way down) how he smartly removed layers at the right time, so he wouldn’t sweat and be wet and cold at the top (like the rest of us idiots).
Of course we had to take a picture. And while I was snapping it—telling them to move this way or that, messing with the zoom—I was struck by how non-fussy everyone was about it. We were all so tired and cold and dreading the long haul back down. There were siblings fussy with each other, there were all my frustrations—some spoken, some not—about how the whole thing had turned out.
And yet, in that moment, while viewing my family through my camera’s lens, bringing them into focus, I saw clearly. We truly are a happy family. Not by what we have brought to the table of happiness—a laughable proposition!
No.
We are a happy family because of God’s divine and merciful intervention in our lives. We are happy because—like the photograph—we are standing square in the center of His creative power. All we bring to the equation is our recognition of the Truth, and even this—I would argue—is His gift, too.
Hmmm…
Maybe this is what Tolstoy meant in his line about happy families…
Copyright 2015 by Shari Dragovich