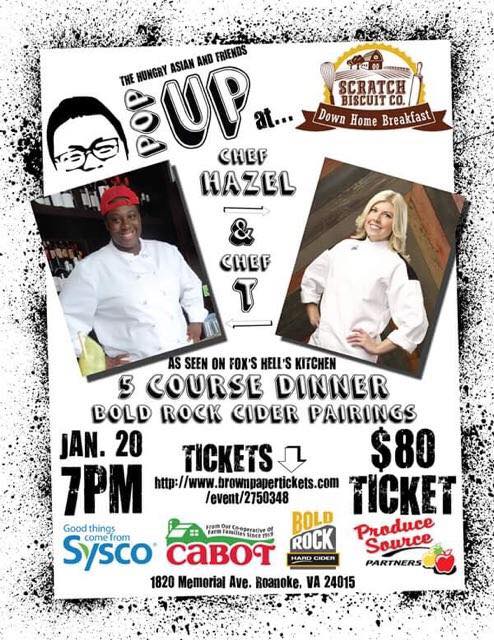 Two weeks ago, I attended Roanoke’s first official Pop-Up Dinner. “What’s that?” you ask. Pretty much what it sounds like: a dining experience that “pops up” for a one night only appearance. Like lots of terms these days (‘hipster’ and ‘lit’ for example), the definition of ‘pop-ups’ is in flux and ever-expanding. One website I looked on calls pop-up dinners “flash picnics”. Another calls them “supper clubs”. Pop-up dinners can be lots of things, but primarily they are a way for a chef to try his or her new creations or specialties in a new setting, with a new audience.

For our town’s first pop-up, two chefs from Hell’s Kitchen—Chef Hazel and Chef T—worked together with Hard Rock Cider to prepare dinner guests a five-course meal with hard cider pairings. I’d never experienced a five-course meal and I’d never experienced a meal with hard cider pairings. Wine and food pairings, yes. Alcoholic apple cider with food? Not so much. All I knew is I paid $80 to be gastronomically wowed. My expectations were high.

The first course was a lovely salad of some sort with approximately three leaves of lettuce and some crumbly cheese and a dressing that all together tasted gorgeous and fresh and…not enough.

The second course was a scallop. One. It was cooked to perfection—I’ve never tasted a scallop so perfect, so melting. It sat atop some pureed root vegetable that I never would have thought could be delicious, let alone edible. The presentation was spectacular. I almost licked my plate.

About this time, my dinner companions and I were looking at one another with some weird mixture of feigned enjoyment and very real fear.

Wow, this food is delicious!

The salad, so fresh.

How did chef get the scallop seared perfectly?

The cider pairings are quite nice.

Hopefully the pizza joint around the corner will still be open once this is over.

After an almost uncomfortable delay, the third course came out: Cider Braised Pork Belly with Apple Gratin and Brussel Sprout Bacon Hash. With each course, the chef who created it came out beforehand and explained her inspiration, ingredient list and a little about her culinary wizardry so that we, the partakers, could be properly informed in our  exclamations of “hints of” these flavors and “meldings of” those ingredients. “Who would have thought something with the word ‘hash’ in it could taste like French fine dining?” We marveled, slowed our bites, savored the smells, the flavors, the hard cider pairings. 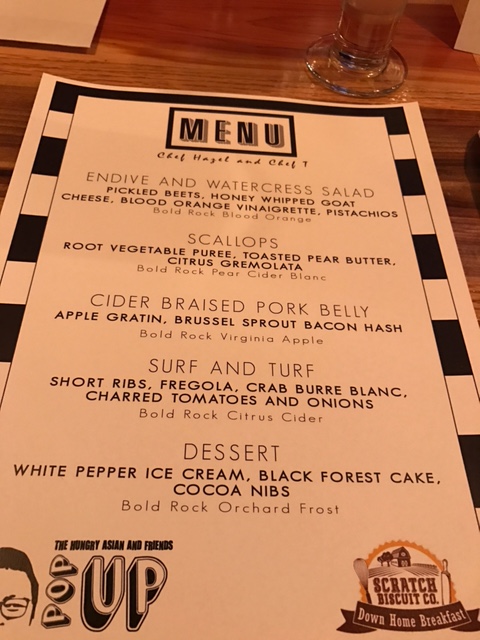 By the end of the third course, and a little over an hour into dinner, I noticed my initial concerns (read: wide-eyed worry) about not leaving full were waining. In fact, I was feeling pleasantly satisfied and even (gasp) a little satiated. But there were still two courses to go: the Surf and Turf, which included Short Ribs, Fregola (whatever that is), Crab Burre Blanc, and Charred Tomatoes and Onions; and dessert: White Pepper Ice Cream (for real) on top a Black Forest Cake and sprinkled with Cocoa Nibs.

The Surf and Turf came out. It was the largest portion yet, but still looked manageable to my eyes, thus stomach. As with the previous three courses, I was astounded by the flavors rolling around my palette, bumping into every taste bud, sending my senses into gastronomic heaven. The fregola looked like chick peas and tasted similar to gnocci. The short rib meat melted in my mouth. With each bite I inched closer to the condition of topped-off, a dining brilliance orchestrated by our very creative and capable Hell’s Kitchen chefs.

Two and a half hours later, we walked out the doors of our pop-up dinner satisfyingly filled with both excellent food and perfectly-paired drink. We laughed at ourselves, admitting our near-panic after the scallop came out, and then feeling almost too full to finish our dessert. We—grown, very educated adults—kept mentioning how the slower we ate, the more full we became, and isn’t crazy how this little diet factoid really does work?

I’ve had a couple weeks now to process that five-course, slow food experience. I can’t help but think of the old story of the emperor who wore no clothes; a man duped by his own high-minded elitism. There I sat at our pop-up dinner, acting like I was above my own American “super-size me, woof-it-down” instinct. But with each course that came out and didn’t meet my expectation of size or speediness, I fidgeted in discomfort, exposing my “more is better and faster is best” mentality.

I struggled to slow down, be fully present, taste the abundance before me.

When I finally did exhale my fears and attend fully to the food, I was deeply rewarded. Not just sensually, though there was that. Something happened in my mind and in my soul. There in the midst of experiencing fully the moment and the meal, I suspended judgement. I let go of tattered expectations and my own hurried habit of making hasty declarations of every blessed thing I encounter before engaging with it, seeking—first—to understand.

You might think I’m about to suggest that if we all start eating slower, our nation’s collective and hateful disease of quick judgement casting will magically disappear.

No. I have no answer for America’s current finger-pointing, tongue-lashing predicament. I only want to offer to you what I, myself, have aspired to with my food this 2017.

Every meal can’t be a five course, two hour epicurean delight. But every meal can be approached with slow, full, and thank-filled attention. Whether it’s one beautiful scallop with root vegetable puree, marinated kabobs off the Green Egg Grill, or a peanut butter and jelly sandwich, I want to take eating slower, more purposefully, and with a glad heart.

I want to make eating as much about nourishing my one eternal soul, and not just my one temporal body.

And who knows? Maybe a collective effort at eating slower really can combat the hateful rhetoric of our current culture. It is, after all, a disease born of malnourished souls.