How does a Place Become More than a Place? (or, Happy 89th, Texas Tavern!) 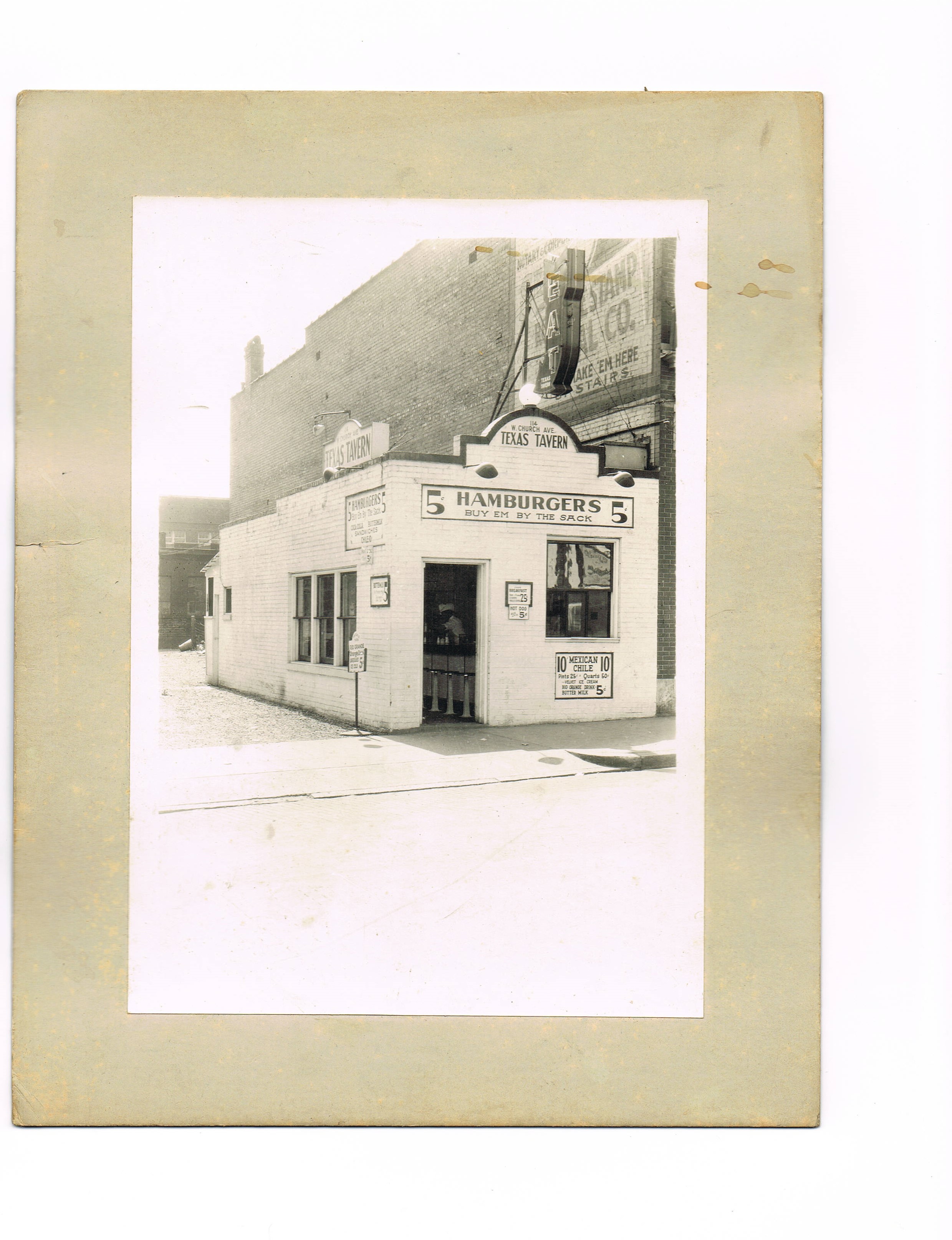 This week (Wednesday, the 13th to be exact) marks the 89th birthday of a very special place in my community: The Texas Tavern.
The Texas Tavern is a matchbox-sized, shotgun-style diner situated in the heart of downtown Roanoke (depending on where you consider Roanoke’s ‘heart’ to be). This week, eighty-nine years ago, a fifty-three year-old, wanderlust entrepreneur by the name of Isaac ‘Nick’ Bullington opened the ten-stool restaurant only months after the stock market crashed, launching our nation into the Great Depression.
Bold move for anyone, let alone a newcomer to south of the Mason-Dixon line. Then again, Roanoke’s never been shy about welcoming newcomers. I should know.
Nick styled his diner after the up-and-coming White Castle restaurants that had been popping up by the dozens across the Midwest and into the East (And you thought McDonald’s was the beginning of fast-food chains). His menu was short, his food was hot, his chile was spelled with an ‘e’, and his prices hit the spot—especially in a hard-times economy. 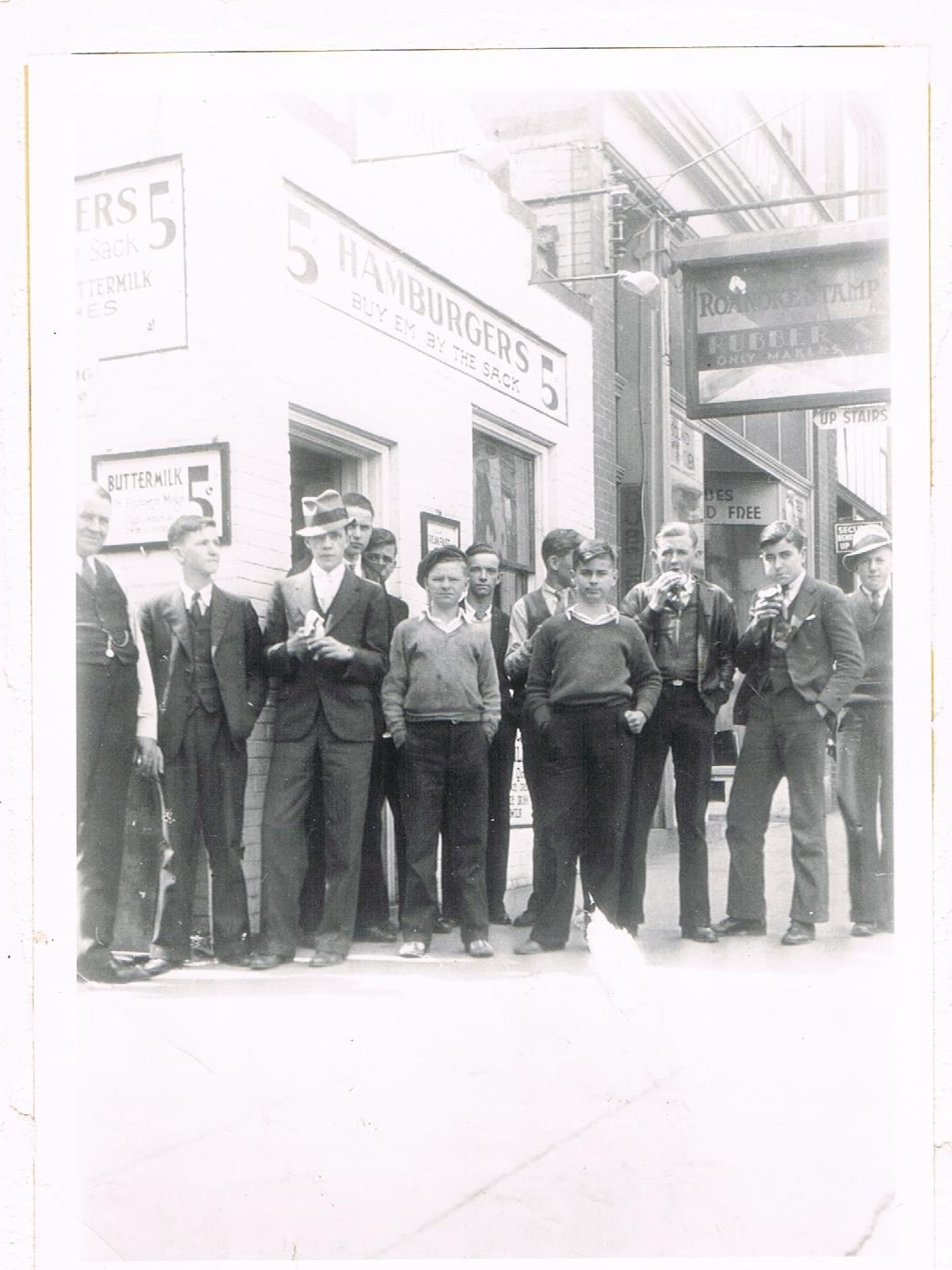 Opening Day at the Tavern. Have you ever seen a more motley crew? Nick is on the far left.

Eighty-nine years later, in an era when fast-food restaurants are hated as much as they are frequented and the snobbery of the food critic abounds, The Texas Tavern and its classic fast-food fare is the stuff of legends.
And here’s where I wonder:
What makes a place more than a place?
What turns a ten-seat hole-in-the-wall into a beloved institution? One worthy of book publication, even? (That would be the one I’m writing)
The Texas Tavern presents as a dinky, out-of-place curiosity in an otherwise grown up cityscape. It still only seats ten people at at a time, at its old, metal, dinged-up counter. The original footrest that sits below the ten stools is so worn from eighty-nine years of feet resting on it there are long gaping holes running along its top. The hamburger-hot dog-chile based menu has changed little since it opened, but has its own unwritten language everyone knows–unless you don’t. They don’t serve fries, or offer tomatoes or lettuce for your burger, and they won’t give you ketchup unless you ask. Even then, they’ll give you a little heck about it—all in good fun, of course. 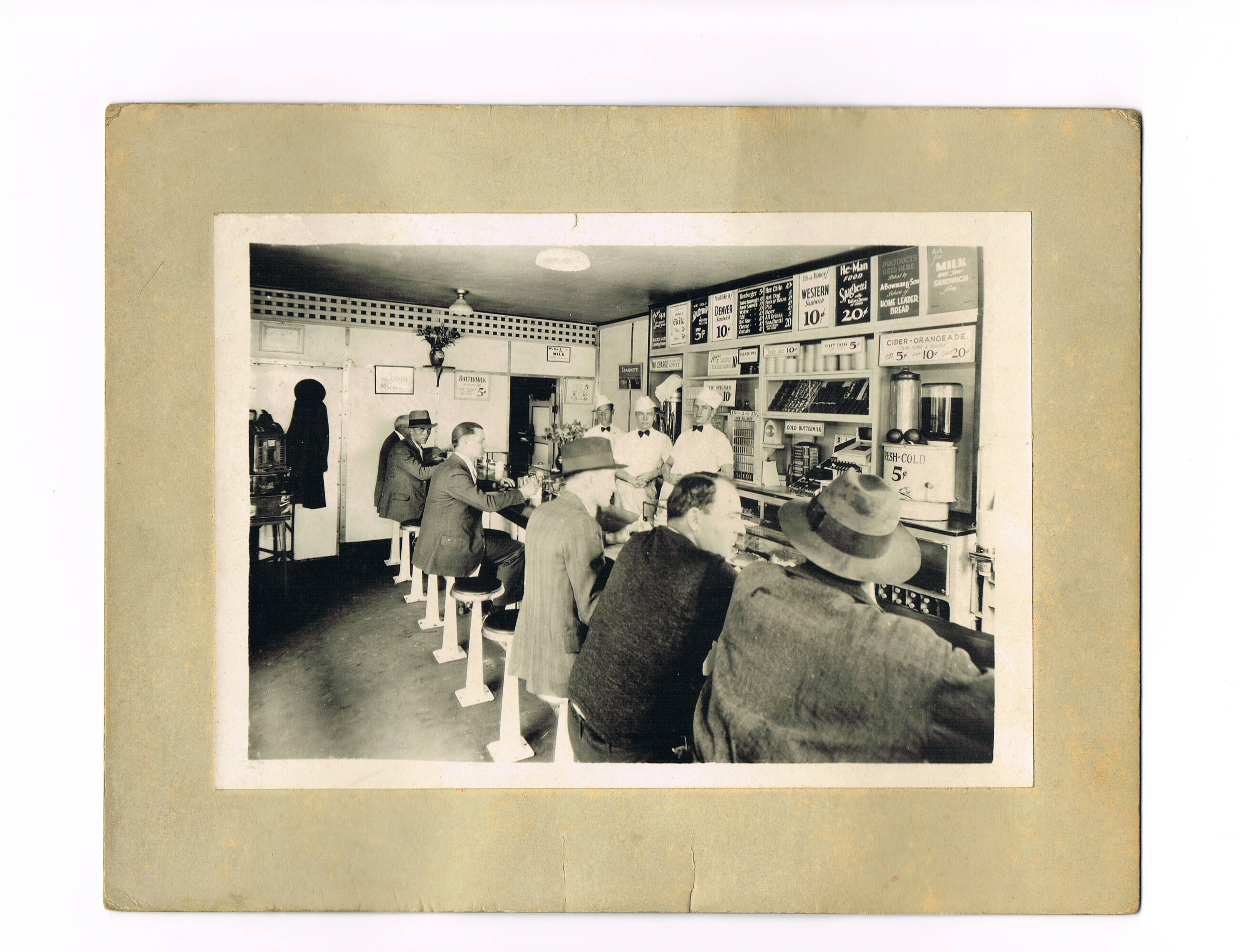 Put plainly, the Texas Tavern is anything but “innovative” or “gourmet.” (popular notions in restaurants today)
But let me tell you, the Tavern’s importance to my town is worth more than all the fancy downtown restaurants that’ve cropped up over the past decade, combined.
Which leads me back to my original question:
What makes a place more than a place?
Nine years ago, when the Tavern turned eighty, a local columnist wrote a tongue-in-cheek (as is his style) article in which he commended the Tavern as a place but then railed on its food.
Bad idea.
Roanokers went crazy. Yet, in almost all their angry responses, folks cited a common thread that had little to do with the quality of the Tavern’s food, and everything to do with the place of the Tavern itself and the Bullington family who owned it (and still do).
And so, in a bit of irony, one could say the columnist and Roanokers were on the same side of the issue. They both “liked” the place of the Tavern.
Except, they weren’t on the same side at all. The mail made it clear.
What gives?
I wonder if at the heart of the issue is the definition of place itself.
In these late-modern times, we are a culture of “experts.” We are a people with passions we fuel and specialties we first create and then nurture. We are foodies who drink craft beer and sport locavore bumper stickers on our cars (along with all our other special identifiers). We have careers that read like jobs within jobs: psychobiology, diagnostic medical sonography, computer information systems management.
Experts and specialists are great. I happen to love craft beer and buying my food from local farmers. I’m thankful for medical specialists (I’m married to one) and web designers (because you’ve seen my lousy attempt). I like pitching coaches and adoption trauma therapists. I rely on a whole host of experts on a regular basis just to make it through my days.
But I do wonder if sometimes (oftentimes) we take the “expert” thing too far.
For Roanokers, the Texas Tavern embodies the wholeness of place. It’s both a living entity in the present, and yet embodies the life of generations before it. It has shaped the people of its community; while simultaneously being shaped by its community, too. The Texas Tavern could never exist in any other place and still be the Texas Tavern. It is what it is because of where it has become. Likewise, Roanoke is what it is because the Texas Tavern exists within it. 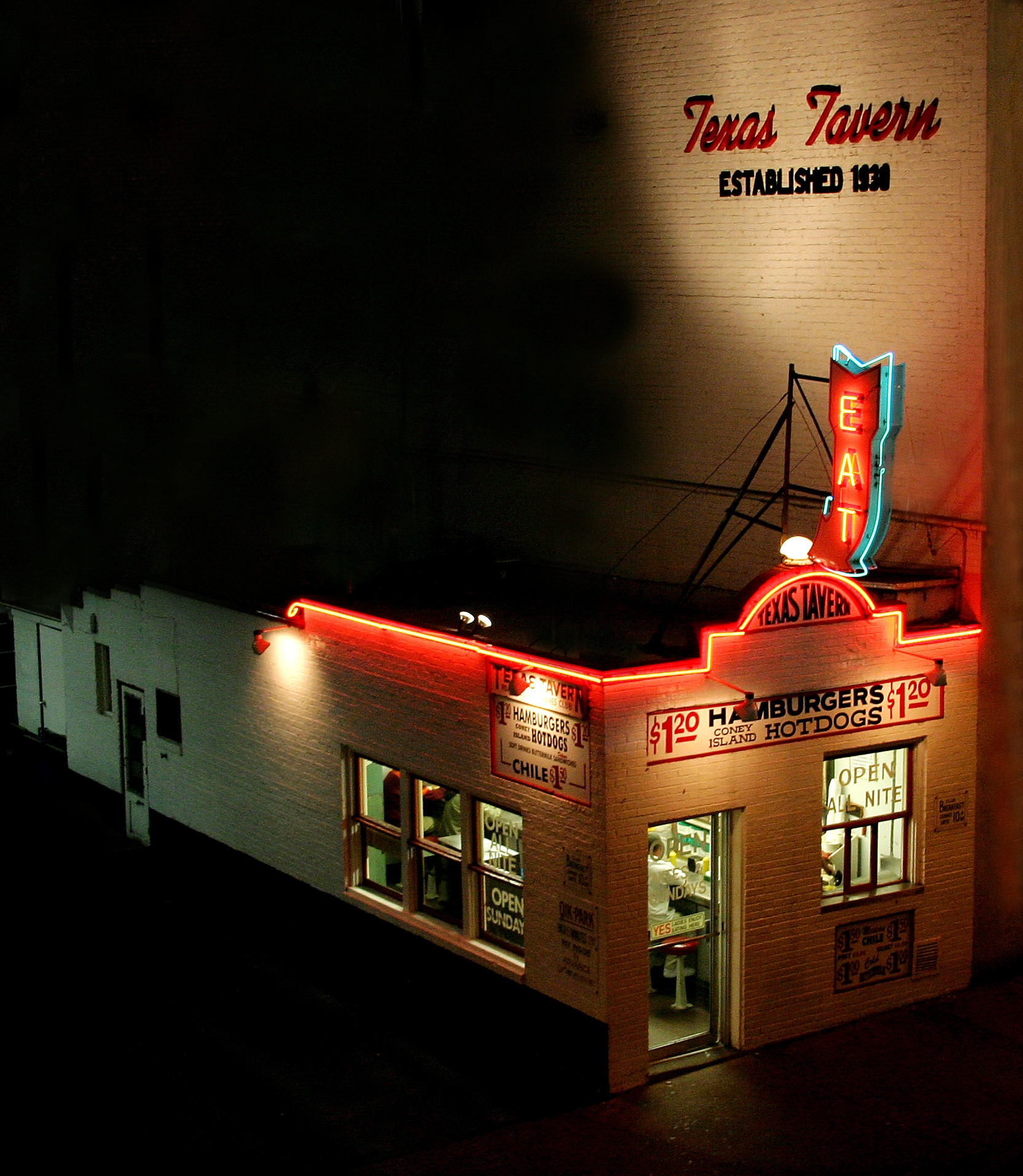 The Texas Tavern today. Yup. Looks pretty much the same.

The columnist (who was quick and profuse in his apology, by the way) was looking at the Tavern through the eyes of an “expert.” But, as Roanokers let him know, expert eyes were not what was needed when considering the Tavern. Whole humans living steeped in their place—that’s what was needed.
It’s what is needed still.
So, what makes a place more than a place?
I’m not sure. Maybe it’s something that can only be understood through the medium of story—which is a big reason why I’m writing the book. I do think it involves hearts and minds bent on seeing and living into wholeness and not expertness.
Beyond that? Well, I’ll leave it to the experts.
But, here’s one more question for the road:
What if we stopped being experts of things, and started being people of places?
Happy 89th Birthday, Texas Tavern! Thanks so much for being a whole place. 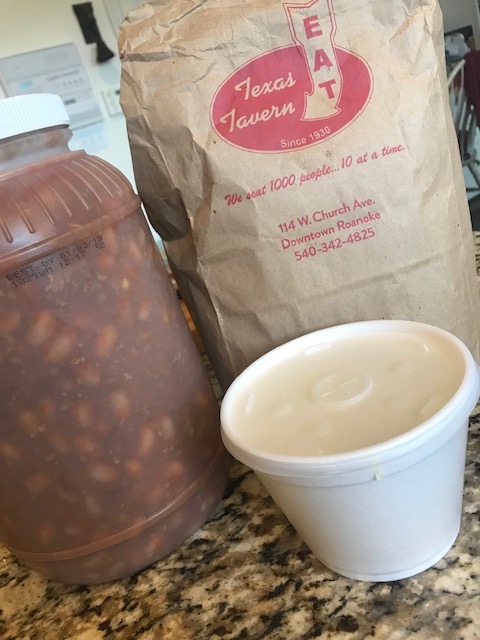 Lots of ‘bowls with’ at home